Don’t listen to all the fear-mongering and hysteria about ‘banning’ apps or devices, or trying harder to ‘control’ your child.

The truth is, parents CAN let their kids use the internet to do the things they enjoy, and keep them safe at the same time — and my new Safe on Social Toolkit can show you how!

Ah, yes … I get that question almost every day.

My name’s Kirra Pendergast, and over the past five years I’ve taught online safety to more than 400,000 schoolkids (and their parents).

And now, for the first time, I’ve taken everything I teach in my nationally-acclaimed seminars …

And I’ve created the Safe on Social Toolkit: a digital ‘survival kit’ of everything parents need to know to keep their kids safe on social media right now.

But before I tell you about it, let me be completely upfront with you:

So please read this letter carefully before you decide to buy it!

That said, for parents who are worried about what their kids are doing (and seeing) online … my new Safe on Social Toolkit could be the most powerful tool you’ve ever had for keeping them safe.

And in case you aren’t yet convinced of why most parents NEED something like this in their back pocket, this chilling story will do the trick … 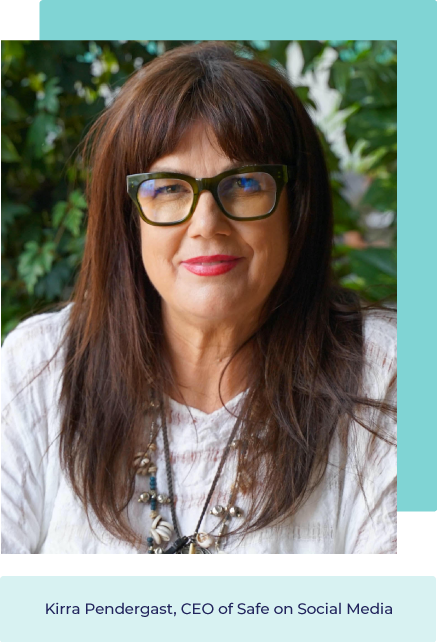 Recently, I gave an ‘online safety’ talk to a group of schoolkids.

Part way through, I asked them a strange question:

“Who here has had a stranger on Instagram ask them for a picture of their feet?”

The teachers in the room were confused … but the kids knew what I meant.

Instantly, about a dozen hands went up.

One particular boy — he was 12 years old — told me he’d been contacted by a man online:

So this boy — being naturally trusting, as most kids are — happily sent back a picture of his feet.

What he didn’t know was that he was being “groomed” … and this was just the first stage of something much worse.

The man came back and thanked the boy for his picture. Just what he needed, he said.

But then, he had another request: for some more … inappropriate photos.

Of course, the boy wasn’t that naive. He responded: “Come on, I’m just a kid!”

The reply he got couldn’t have been more chilling:

It gets worse though.

The stranger then started sending him a flurry of pictures of himself.

They showed him sitting at a dinner table …

And a whole group of other young boys.

Does that make you feel ill?

Well, the part that should scare you is what happened next:

The boy responded, quite naturally, with a bunch of curse words — telling the stranger to “get f...ed”.

But then … he didn’t tell his parents about what had happened.

Because he thought he’d get in trouble … for swearing.

By the time I found out about this incident, six months had already passed — and he was still too afraid to talk to his parents about it.

The only reason this story ever got told was because I knew what to ask for with my ‘strange’ question about feet.

And it begs the question:

As parents, how much is going on with our kids that we just have no idea about?

Trust me, this is just one example of literally hundreds I’ve come across, where kids are being exposed to things their parents have no clue about.

Most of the time, kids won’t proactively talk to you about these things.

So if you don’t have a good idea of the kinds of things kids are doing online right now, or how to get on the front foot and talk to your child about it … this could be happening to them, without you knowing it.

And here’s the worst part:

Just ‘limiting screen time’ doesn’t keep kids safe from any of it.

But let’s face it: no matter how much you crack down on social media, you can’t control what they do at school, with other family members, or at a friend’s house.

Of course, using software solutions to try and ‘block’ or ‘control’ access doesn’t work either. Trust me, kids are always one step ahead of you, and they’ll find a way around it.

And trying to keep up with “free” information online is a losing battle, too. There’s so much it’s overwhelming, yet most of it is out of date — and do you have the time to try and keep up with it all?

Besides, if all you’re looking for is a way to ‘crack down’ on your child’s social media use …

We live in a digital world now. Our kids are going to need to use these things one day as they grow up. So just ‘controlling’ and ‘blocking’ can’t be the only answer.

Ultimately, you want to keep your kids safe without depriving them of the things they enjoy, or letting them have fun with their friends.

That’s why I take a different approach to most other online safety ‘experts’.

I believe that, with the right guidance, any parent can make social media a safe and productive environment for their kids.

That’s what I teach thousands of parents a year around Australia through my seminars — and I want to show you how to do it, too.

No guilt. No shame. And no overwhelm!

That’s why, for the first time, I’ve put all my very best tools and strategies from my seminars into a single online package that any parent can access, anywhere, any time.

The Safe on Social Toolkit is a digital ‘survival kit’ of everything you need to know now to keep your kids safe on social media.

I spend dozens of hours every month talking to parents, teachers and students, keeping up with what’s ‘hot’ with kids right now. And nearly every single week, I update the Safe on Social Toolkit with the latest of what I’ve learned.

You’ll find the answers to all your most pressing questions (and the questions you don’t even know you have till you’re up at 2am, frantically looking up the app you’ve found your child using).

With the Safe on Social Toolkit in your back pocket, you won’t need to be anxious about what your child is doing, or scared that they’re hiding things from you.

And — which is your best defence of all — you’ll know how to talk to them about what’s going on.

Like I said before, the Safe on Social Toolkit isn’t a substitute for parenting. It’s not a magic button. But it WILL give you the confidence you need to know you can guide your child safely through social media. 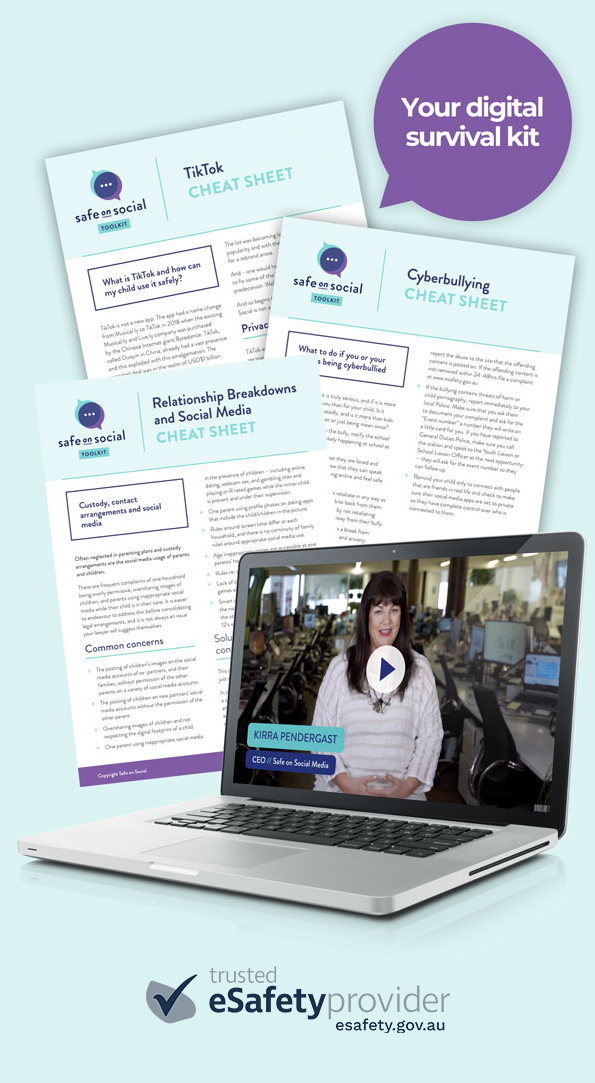 Let’s stop for a moment to talk about this one.

If you have a teen you almost certainly know of Snapchat — it’s one of the most popular apps going round.

However, what most parents don’t know is that it has an inbuilt ‘loophole’ that can allow complete and utter strangers to tell where your child is right now.

(And it’s not a ‘bug’ — it’s an official Snapchat feature, and your kids have probably even turned it on deliberately.)

If you have a child that uses Snapchat, this is something you definitely need to discuss with your kids!

But relax: in Module 8 I’ll show you, screen-by-screen, how to configure it to make it safer — and what to say to your kids to make them understand the dangers.

Many people get hysterical about how ‘dangerous’ social media can be, and talk about all the problems you can run into with something like Instagram.

Of course, there are dangers, if you don’t know how to deal with them (something my toolkit will show you).

And for 99% of kids, social media is almost always a bad thing when it comes time to get a job.

But I don’t want to scare you — I want to empower you.

The truth is that social media can also be an incredible force for good, too.

So in Module 6 I’ll show you a counterintuitive strategy your child can use for turning social media into one of their biggest assets when it’s time to get a job! 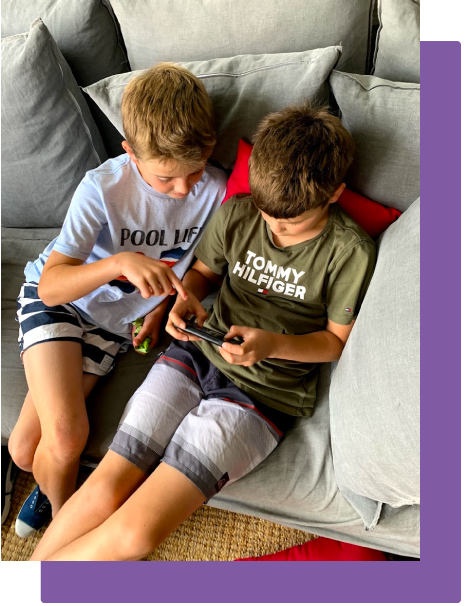 7 ways to make YouTube safer for your kids to watch (Module 14) … the quickest way to work out whether someone is a predator faking their identity (Module 6) … why taking your child away from their device if they’re being bullied is one of the worst things you can do (Module 16) … the new social messaging app that’s full of men looking for girls that will do whatever they ask on camera … and dozens more things I am updating every week as I find out about them.

But don’t worry: unlike my seminars, you won’t have to devote two hours to find what you need.

Everything is divided up into dozens of neatly-categorised, bite-sized videos you can watch in a few minutes, exactly when you need them. But that’s not all … 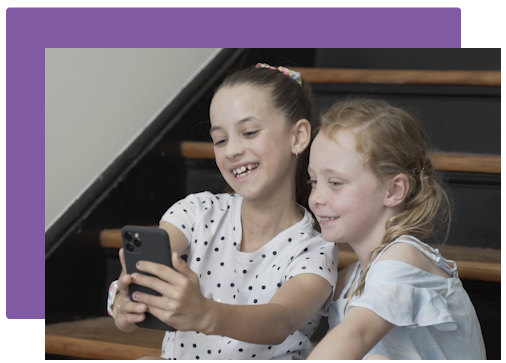 That’s right. As part of the Safe on Social Toolkit, you get exclusive access to send through questions about your situation, and someone from my team of experts will personally answer you! 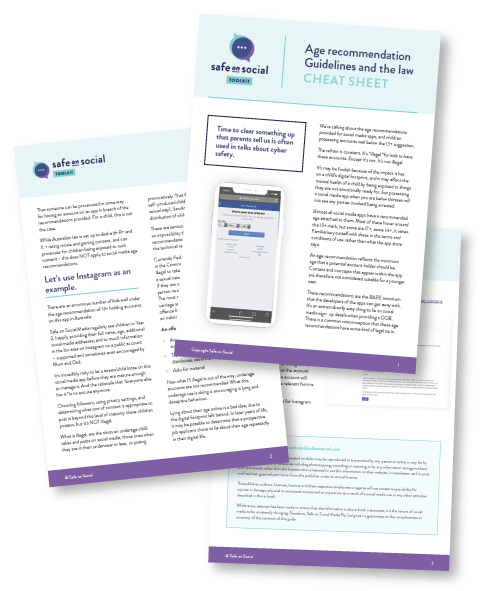 Until now, the only way to get access to what I teach was for your school to pay me nearly $2000 (plus travel expenses of several hundred dollars) for a one-off seminar.

Well, the Safe on Social Toolkit is just $97 for 12 months of access.

(That small fee helps me cover the expenses of producing and maintaining the content, and lets me stay at the forefront of kids’ social media so you don’t have to.)

Yes, for less than the price of your yearly Netflix subscription, you could sidestep all the worry and anxiety, knowing that my team and I have YOUR back.

You won’t have to waste any time trying to stay up to date with things … I’ll do it for you.

You can just enjoy the peace of mind of knowing what your child is doing online, and how to confidently talk to them about it.

(Oh, and you’re covered by my 30-day money back guarantee, which lets you check out everything and get a full refund if it’s not what I say it is. You won’t need it — I’m convinced you’ll be blown away when you discover how much you didn’t know. But it’s there for you nonetheless.)

So if you’re tired of worrying about your child online … and you’re ready to transform social media into a positive, enriching, and worry-free experience for both you AND your child … grab the Safe on Social Toolkit today, and let me show you how.

I’ll be waiting for you on the inside!

We suggest moving this party over to a full size window.
You'll enjoy it way more.
Close
Go Fullscreen